From the last session with C., we have a login screen.  Now C. would like the little Yahoo! Messenger guy to bounce around. 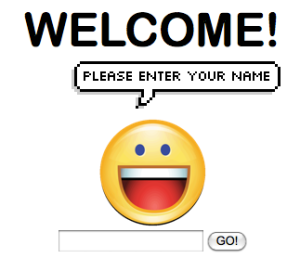 She fired up TuxPaint and created a drawing of a spring

I started to read about the YUI animation library

First, we copy these 2 lines to include YUI libraries

YUI has very simple syntax and she was intrigued with Y.one() syntax to create a node for #happy_home

YUI has some sample code, at this point because I’m also learning Javascript and YUI, I experimented with the animation and finally was able to get the Yahoo! Messenger icon to bounce

node : is the the happy face guy with the speech bubble
duration: is how long the animation goes on each iteraction
easing : how you want the animation to easy into the position

to : We want the animation to run so that the happy face will go to the point at 60 pixels above the guy and
interactions: we want this to run for 100 times